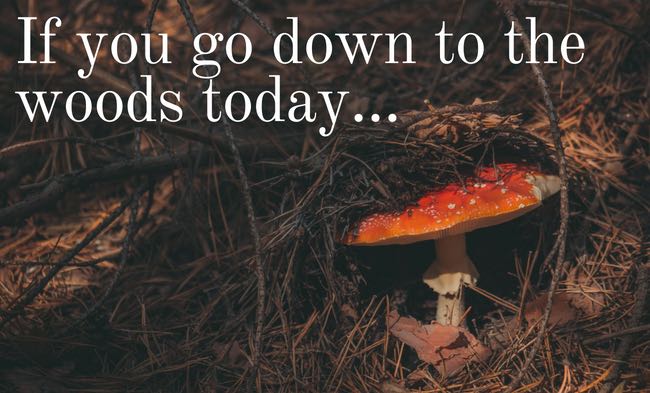 Do you love myths and legends? I’m guessing if you’ve read The Order of Shadows there’s a fair to middling chance you do. As you can probably tell from the image above, I have a new book coming out very soon and it has a strong faery tale aspect, wrapped up of course in a shroud of mystery and darkness. Because, well I don’t really do nice nice fluffy faery tales 😀

The new novel has monsters, myths, other worlds, heroes, heroines and a host of terrifying villains. Good, Evil and those that are neither and both. There’s elements of The Order of Shadows, and brand new characters and magical adventures and I’m really excited to share them with you!
Get ready for more announcements… soon! 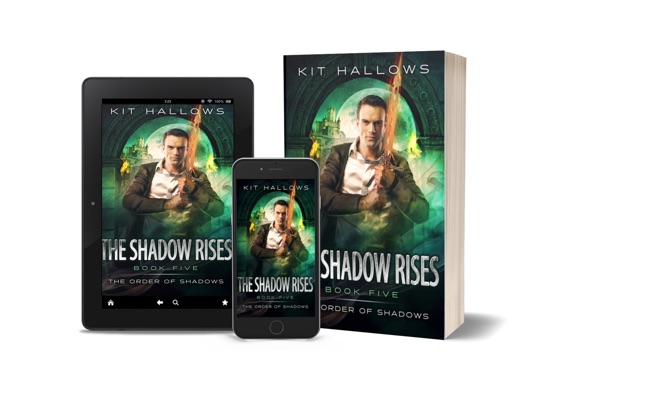 Yes, Book Five, the final installment in The Order of Shadows series, is here!

The Shadow Rises was an epic book to write. I began back in darkest December, which perfectly suited the snowy, icy setting, and finished just as spring was stirring. And now it’s here, out in the world, the longest, darkest Morgan Rook novel in the series.
Here’s the blurb from the back cover:

Two Worlds. Dark Magic Rising. The End Game.
Why is it always in the middle of the night? The call came in, an old friend, a harrowing problem and a fight to the death, literally. Then I found myself on a breakneck journey to a place I’d hoped I’d never have to see again. And that was before the real fireworks began.
Next up on the rollercoaster ride to hell; secret meetings, an occult hideout, and an army of the most sinister evil imaginable. And the battle to end all battles.
That was in this world, and it had nothing on what I was about to face in the next as I pursued my final enemy into the blackest of nights.

The Shadow Rises is the fifth and ultimate Morgan Rook novel in the The Order of Shadows series. If you love supernatural thrillers, high octane action and gritty magical adventures, then you’ll love this new book from Kit Hallows, author of Urban Fantasy books with teeth!

So now the The Order of Shadows is wrapped up and Morgan’s taking some well earned time off, I’m about to embark on a brand new series exploring the world of myths and legends, and I can’t wait to get started!
If you’d like to know when the first book in this new world is ready, click here! 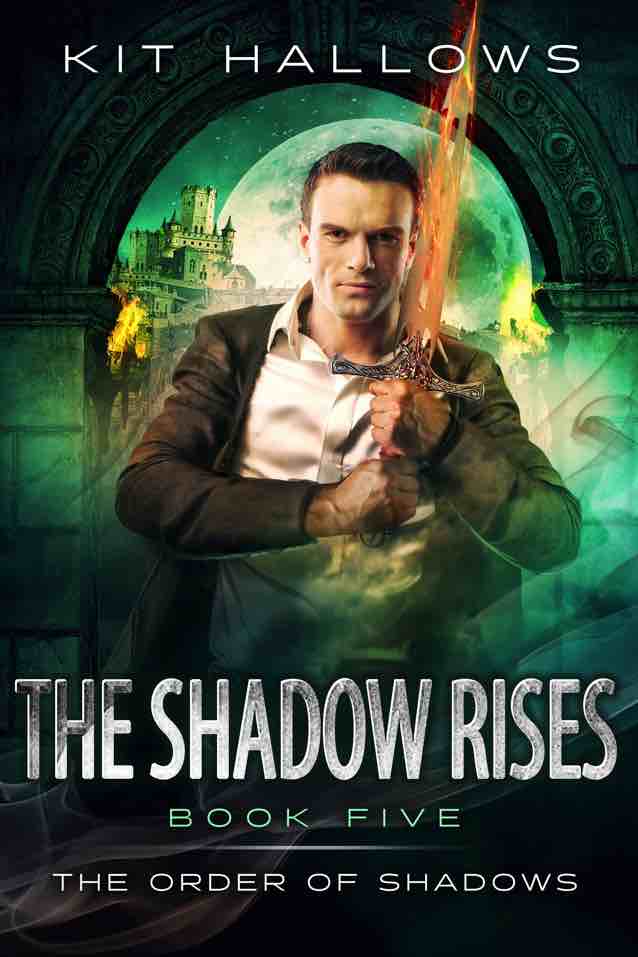 Here’s the first four chapters, I hope you enjoy reading them as much as I’ve enjoyed writing them!

Rhymes grinned at me as he clutched his wound and shuffled back toward the wall. Then the darkness enveloped him, and then he was gone.
I ran to where Dauple lay, the bloody knife protruding from his back. His hands were sprawled before him, gripping the platform as if it were dear life itself.
“Hold still.” I clasped the hilt and carefully, slowly, drew it out. I examined the blade for inscriptions, runes or hexes. It seemed to be a normal weapon, except for a slight discoloration of the metal, which suggested it could have been tainted with some kind of toxin.
I set the weapon down, pulled back Dauple’s coat and ripped open the hole in his shirt, revealing the wound. My medical knowledge was limited but it seemed clear, by the spasms passing through his body, that his injury was serious. Very serious.
He groaned as I delved into my bag and pulled out a vial of healing water. I poured it over the wound and tried to bandage him up. He cried out as the cloth touched his flesh and his fingers gripped the metal struts. “No good,” he said. He grimaced and turned onto his side before I could stop him. “Poisoned. Maybe Cyamorth. The wound’s mortal.” His teeth were stained with blood as he added, “I’ve seen it before.”
“I’m not going to let this happen…”
Dauple shook then convulsed with such force he flipped onto his back. His eyes grew wide as he stared up at the ceiling. “Not long,” he said.
“I…” I gripped his hand and fought back my tears. Despite his strangeness and grotesquerie, he’d been one of the few people in the Organization who had been loyal. And while he was mildly insane and undeniably odd, he was my friend. I wasn’t going to give up on him.
He was dying. That was as clear as day, and I didn’t have a cure but a thought, a memory, shot through my mind. The dealer from Copperwood Falls, the one I’d pursued into death’s domain. “I saved someone before,” I said. “I can do it again. But… I don’t have any black crystals.”
Dauple gave a bittersweet smile. “I do.”
“Really?” I asked. “You said you were addicted. I thought you’d quit?”
“Yeah. I… carry one to remind myself that I have power over it. That they don’t rule me.”
“Where?”
“Chest pocket. Close to my heart.” Dauple grinned but his eyes were beginning to roll back. He was fading fast.
I reached into my bag and grabbed a handful of crystals and used their energy to cast a protective spell around, in case Rhymes returned. Motes of golden light shimmered in the surrounding air as the shield manifested. It wasn’t perfect, but it would do.
My hands were shaking. I took a slow, deep breath as my prior, nightmarish experience with the black crystals leapt to the forefront of my mind. Forcing my apprehension aside I reached into Dauple’s shirt pocket. He shuddered, coughed and squirmed but I found it; a small leather pouch, bound with an enchantment to seal in the dark magic. Its embroidered inscription read:

Presumably the years he’d lost to his addiction. My fingers tensed as I loosened the knot and reached inside. A jolt of power rushed through me as I brushed against cold, polished stone. Then I pulled it from the bag.
The shard was long and jagged and its blackness shimmered like a trail of coal dust on a moonlit night. A low hum thrummed from the stone; a shattering echo of the suffering that had been inflicted on the poor soul who’s life force had been stolen when the crystal was charged. The resonance of pure, black evil.
The stone pulsed like a living thing as I wrapped my fingers around it and drew in its power. The magic scorched my skin, my blood, and my very cells. I shuddered as it flooded me with malevolent power and my dark other shivered deep within.
“God Damn it!” I cried, as the power from the stone collided with the black magic I’d stolen before, turning everything to darkness.
What had I done? What would I become? I forced the thoughts from my mind as Dauple gave a final gasp, gripped my hand, and slipped away. 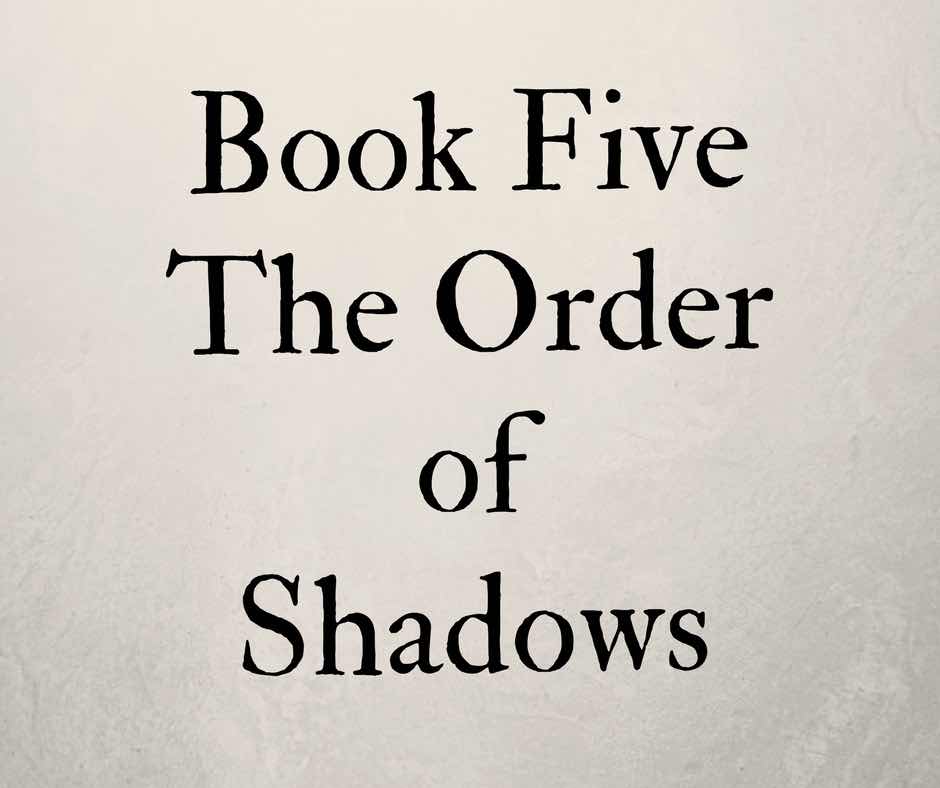 Time for a quick update: Book Five is almost ready… it’s currently in final edits, and on the way very soon.
This is easily the longest adventure so far and absolutely jam-packed with the usual fevered twists and turns and magical battles you’d expect from a Morgan Rook novel. And yes, it’s a showdown, or should I say showdowns.

More to be revealed, including the title and (awesome) cover soon! 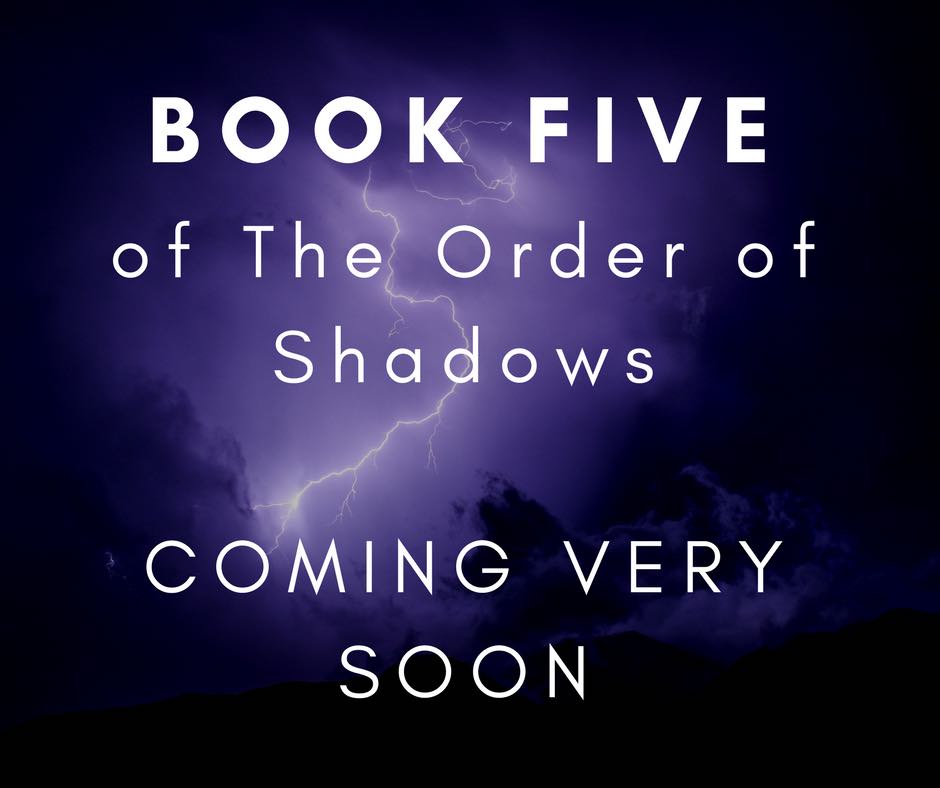 I just passed the 70,000 word mark of book five of The Order of Shadows, and that means the end is nigh. Or night. Pitch black night 😀

Of course I still have a few thousand words to go, and plenty of edits, but I wanted to give you a quick update & let you know I’m hoping to publish book five in April. And I can’t wait for you to read this final installment of Morgan’s story. Or should I saw the last episode for now at least…

I’ll post a preview of the novel soon, the first three or four chapters or thereabouts, so keep an eye out for further news here, and you can also follow me on Facebook!

Okay, back to work. The storm’s arrived and things are getting very dark in a certain other world… 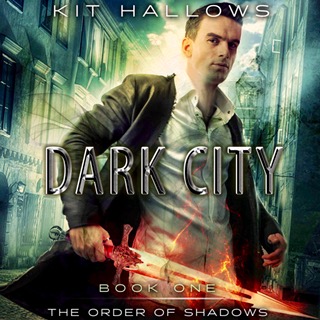 I have some wonderful news to share today with readers of The Order of Shadows… Dark City is now avaiable on Audible!

You can view the page and listen to a sample here:

The narrator, Shawn Compton, did an amazing job of narrating as Morgan and perfectly captured his gritty voice, and he’s working on Midnight Falls right now! If you’ve read the book already, you can now hear it again, which is a brand new experience.

Go ahead, listen to a sample and join Morgan’s adventure in a whole new medium!

I have more updates to share with you coming soon. Including an exclusive preview of Book Five of The Order of Shadows, the final episode in the series (for now).

More on that soon…